Author Loren Mathis invited me to do a guest blog post on her site. I talk about what inspires a story. Check it out here: http://lorenmathisbooks.blogspot.com/?zx=5b5a3922753b93be

With the Monday release of Silver Nights With You just days away, I thought it would be cool to give readers a glimpse into the real places that inspired the events in the novel. I’ll post some photos here and the chronological order in which they appear in the story. Enjoy the photo tour!

Here are a few shots of the valley view that weary travelers came upon after weeks of dry desert, and the site of Morgan’s future ranch… 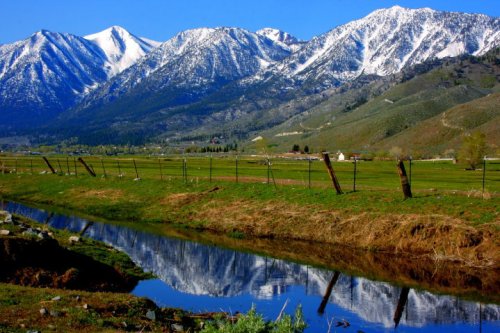 The building that housed Virginia City’s newspaper, The Territorial Enterprise…

The Silver Queen -with a modern edge…

The Smell of My Life

This morning I used up the last drops of my body spray, and the timing couldn’t have been more perfect with the onset of Autumn. I have this weird quirk, you see, of changing my “scent” for every major season or phase of my life. I don’t like to perfume-hop. There is a really good reason for this. I have always associated memories from my childhood with smells. You know when you get a whiff of your mother’s old perfume and it takes you right back to a certain time and place and suddenly a memory, more vivid and colorful than ever before, bursts into your mind? You laugh at something you’d forgotten, and you smile for the rest of the day when you think about it. Yeah – that’s why I do what I do.

The summer of 2014 will always smell like Sensual Sunset from Victoria’s Secret Garden. The scent was discontinued years ago. Someday, they will bring it back or some other perfume company will put out something similar, and when I’m walking past someone wearing it I’ll go back to this season. I’ll remember my baby sister’s wedding, and all of the associated parties and gatherings. I’ll remember the girls’ weekend my friends and I took to Mesquite. I’ll remember the day my baby girl turned two, the day I spread my dog’s ashes in the mountains, and the horrible toothache that resulted in my first root canal. I’ll remember my husband’s 40th birthday bash in the mountains of Utah and the release of my third novel.

When I want to remember my pregnancy with my son more than eight years ago, I go to Tomigirl by Tommy Hilfiger. Moonlight Path takes me to my best friends’ condo in Reno in the winter months post college graduation. I moved in with them to save money for my trip to Europe. We’d sit on the roof, drink gin and tonics and smoke American Spirits while chatting away and looking at the unobstructed view of downtown Reno. Lavender oil takes me to the summer I backpacked New Zealand with my best friend. Senior year in high school is all Jovan White Musk. Japanese Cherry Blossoms takes me to the Fall I hiked the Grand Canyon, rim-to-rim.

Anytime I smell passionfruit, I am transported to a European summer; squatting in London; getting spit on at the train station in Paris because I am American; riding bikes to the beach in Barcelona and chilling out in the sand with sangria; celebrating the fourth of July in Rome with a group of American soldiers stationed in Germany; being dragged to a piano at an Italian streetside restaurant to pound out Ballin’ the Jack and the theme to Dr. Zhivago while the old Italian musicians waltzed with female patrons on the sidewalk (I earned us a free dessert with my playing!); an amazing roadtrip through the Swiss Alps; roaming the streets of Salzburg in the rain; the crazy albino who ran the hostel in Prague; the beer festival in Wurzburg; falling in love…that’s what passionfruit means to me.

Most of the time, depending on the size of the perfume bottle, I don’t use up all of the perfume in one season. The great thing about that is that I can retrieve whatever memories I want by simply walking over to the top of my dresser and pulling open a bottle. It’s like a lifetime of yearbooks on my dresser, only prettier. And when I really want to go back, I’ll wear the scent for a day. Now, I just have to decide what I want my Autumn to smell like.

Writing Silver Nights With You has been a true labor of love…and hate. I started writing this book in the days following the birth of my daughter. Sleepless nights and weeks of maternity leave provided ample opportunity to get this story down. However, I was not on my best mental game at the time and I felt that came across in the first draft of the story.

My daughter just turned two last month. So, that should tell the reader that I’ve spent two years editing and revising this book, and it wasn’t until I picked up a really awesome beta reader at the beginning of the summer that I began to fall in love with it. I knew the backbone was good. I mean, it’s in the early years of my home state, which I would argue is the birthplace of “The Wild West.” Silver booms, gunfights, stage robberies, lynchings, and good, old-fashioned grit? That’s just too much good drama to pass up on a love story. But it was the fleshing out that was lacking.

As a writer, it’s so easy to lose sight of the forest for the trees. A good beta is such a vital part of the editing process. He/she will help you see things that you just can’t, and they will point out the important elements that you, the author, has left in your head during the writing process.

I had almost given up on this story and trashed it. Now, after two years, I am quite on the verge of calling it my best work to-date. I am very excited to introduce readers to Morgan and Lila, and the book is slated to go live on September 1st of this year.

Until then, please enjoy this excerpt…

She shot straight up in her bed, sweat beading down her neck and back as she panted for air. Her throat felt thick with phlegm. She couldn’t swallow past it no matter how she tried. The white curtains rustled near her open window, and she watched the moon hover in the sky. Her eyes stung with tears. It was the fifth nightmare she’d had since the robbery, and she felt the need to feel the breeze on her sweaty skin. She grabbed her robe, tied it over her nightgown and made her way out to the back porch.

The chairs were still scattered from the evening’s poker game. She sank into the nearest one and wept into her hands. The night wind rolled off the mountain with a soft moan and tossed dead leaves around. The deep call of a night owl moved on the air current. It was calming and peaceful. She leaned back against the chair and propped her feet up onto the edge of the seat so she could wrap her arms around her knees.

There was a movement in the shadows near the barn and she squinted to make it out. It moved toward her, almost like her dream, and she held her breath until she recognized Morgan. She exhaled sharply and wiped her eyes on her knees as he strode up the porch steps.

“Good evening,” he said. There was enough moonlight to read the concern on his face.

“What are you doing out here?” she asked.

“I couldn’t sleep,” he answered. “I see you have the same problem.”

“Oh, I can sleep. I just can’t seem to do it without nightmares.”

She nodded, then slowly brought her eyes up to connect with his. “You were right about what you said before. About the way you feel when you kill someone. It sticks with you.”

“It is one of the rare occasions when I detest being right,” he said with a smirk, and she smiled. After a brief pause, he continued. “Have you spoken to your father about this?”

“No.” She shook her head solidly. “My father is…well…he’s the sort of healer who absorbs the stress of his patients. It’s difficult to explain, but it’s as though he actually suffers with them, feels their agony. It takes a toll on him. He does it even more intensely with me so I don’t share my burdens with him.” She looked at the ground. “I do not even grieve around him.”

“That’s not fair to you.” He squatted before her so that she couldn’t avoid his eyes. “You have a father who loves you. You shouldn’t have to feel alone.”

She felt the urge to lean into him, to let him wrap his arms around her, soothe her cares and chase away her demons. The look on his face, the staid brown eyes reaching out to comfort her, all told her that he would welcome her, but she remained still.
“Right now I don’t feel alone,” she said softly. “You always seem to be there to catch me when I fall.”

A smile spread softly to the corners of his mouth. “And I always will be if you’ll let me.”

Emotion flowed freely between them, though neither said a word. She felt it deep, a spark of something unfamiliar but blissfully wonderful. It was something independent of the physical yearnings they shared, something reviving like the first breath of air above water, and it was the first time she didn’t feel the urge to run away from him. It made her smile.

“Know any good remedies to cure bad dreams?” she asked him.

He smacked his lips and tilted his head to the side. “I’m afraid the only way I know is to chase them away with good dreams.”

She chuckled and rolled her eyes. “Know any recipes for good dreams, then?”

They shared a smile, and she shivered against the cool air. He reached out and cupped her face. His thumbs moved in a slow caress along the heights of her cheekbones. The look he gave her was one of promise. He wasn’t asking permission for a kiss. He was telling her one was coming, and as he moved his mouth toward hers, she met him halfway until their lips touched.

It was tender. It was possessing.

Her lips parted, and she felt the gentle stroke of his tongue reaching in to taste hers. He tilted his head to fit their lips together as he slowly explored her mouth with his. She followed the longing of her body and moved her tongue in a slow, sensual dance with his. He was warm and unhurried and tasted of clove with a hint of whisky. It was a potent drug on her senses. The more she tasted, the more she wanted.

But he slowly pulled away and rested his forehead against hers with a sigh. When he lifted his head it was only to peer into her eyes for a moment before he placed a soft peck on her lips.

“Sweet dreams, Lila,” he whispered and released her.